I've wanted to type out my medical issues.  I don't know if anyone will ever read this who may need some immediate medical attention, but our quick action of getting me to the ER when we did could have seriously saved me in so many ways.

On January 19, I suffered the worst headache I have ever had in my life.  It felt like a chain was wrapped around my head and with every beat of my heart the chain tightened.  I also had a horrible pain in the back of my neck which I blamed on the 3 night's sleep I had after Cecilia in the hospital.  I woke Greg up at around midnight to tell him how bad my headache was.  I remember telling him I thought I was having an aneurysm--he laughed a bit and told me to go to sleep.  The next morning the headache was still bad--much worse when I was lying down.

Within an hour of being at the ER, I was diagnosed with what they thought was an intracerebral hemorrhage and they quickly loaded me up in an ambulance to take me to Barnes Jewish Hospital. The most common cause of this type of stroke is high blood pressure which I had only once on this day. 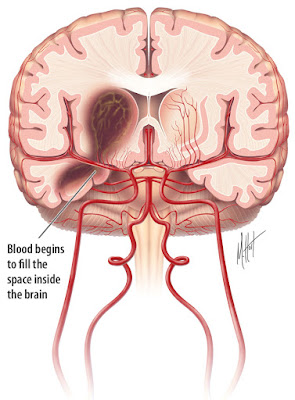 This kind of stroke is different than the most common type which is an ischemic stroke.  An ischemic stroke occurs when an artery to the brain is blocked and therefore blood cannot flow the way it is supposed to.

Four weeks after I was discharged from the hospital, I had a repeat MRI.  During this MRI, the doctor noticed that I had dissections (or tears) in my internal carotid arteries.  The resident called me late on a Saturday night to tell me to go out and get baby aspirin and start taking it right away.  They sent me back for an MRA (which looks more at blood vessels).  A few days later, this diagnosis was confirmed.  Basically, this puts me more at risk for an ischemic stroke.  Looking back at the scans I had while in-patient, another dissected artery was noticed in the vertebral artery in the back of my neck.  I have been tested for a lot of things that could cause these dissections and everything has come back normal.  I even had genetic testing done and I tested negative for a gene that could also cause this. 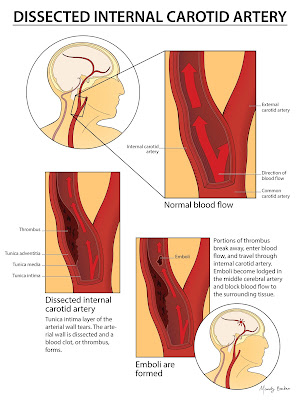 I am trying to wrap my head around having multiple things wrong and no answer as to why or no way to treat then except for taking aspirin.  I seem to be the mystery patient but because I am not having any serious symptoms, they will just diagnose me with idiopathic (which means we just don't have a clear reason why) carotid and vertebral artery dissections.

Now I just wait until August when I will have another MRA/MRI to check with dissections to see if there has been any change.

As I sit here typing this, I realize that in almost SIX months this is the first research I have done at all.  When doctors have seen me and have told me what has happened, my brain literally could not understand.  Many times, they have asked me questions that I could not answer and had to look at Greg to have him help me.  I may look okay on the outside, but my brain just doesn't function in the way it used to.

Elizabeth, I am so sorry <3 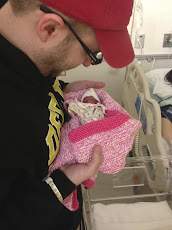